Skipping School: My Entrepreneurial Day Off at Constant Contact, Inc. 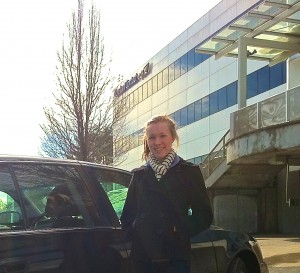 “…unlike Ferris Bueller’s day off, nothing bad happened.”

To do research and get feedback for the Stretcho Games product, my teachers in my Entrepreneurs Club at school suggested we use an online survey service like Survey Monkey. I just set up a survey for Stretcho, and I chose an online survey service provided by a company called Constant Contact. Here’s the story behind it that happened two years ago.

Ever since I began high school, I have been waiting for the opportunity to join the Entrepreneurs Club offered to juniors in my school. Given this interest in entrepreneurship, two years ago, when I was a freshman, I was asked by the founders of an internet startup company, who I knew well, based in SoHo called Bantam Networks to join them for educational purposes at the official announcement day of them getting acquired by Constant Contact, Inc. Constant Contact is an online marketing company that is located outside of Boston in Waltham, Massachusetts. (My Mom’s partner worked at Bantam Networks and she, my brother, and I would frequently dropped by there to say hello to him and the team and play games on their computers and ping pong in their loft.)

So two years ago I skipped a school day and went. On a late afternoon in February of 2011 I took the Amtrak train to Boston with the Bantam Networks team (see video) and joined them for a celebration dinner that night and then attended early morning meetings with them and Constant Contact executives at the company headquarters (I’m pictured outside the company headquarters, above). Constant Contact had issued a “press release” that morning about acquiring Bantam Networks before the stock market opened (they are a public company with the stock symbol “CTCT“) so, as I learned, it was important that the facts of this event were properly shared with the media. In the company’s boardroom, I listened in on the phone interviews with technology reporters who had read the press release. I also met with the CEO of Constant Contact, Gail Goodman, and many other executives who told me about their jobs and how things worked at the company. I got a tour of all of the Constant Constant departments, including a tour of their global operations center which sends millions and millions of email newsletters out every day for their customers. It was inspirational to have toured a company with 1000 employees that was founded and run by a woman executive, Gail Goodman. Everyone at Constant Contact was very nice to me and it was very educational. I went back alone on an afternoon train to Penn Station and fortunately, unlike Ferris Bueller’s day off, nothing bad happened.

Please take my online survey about Stretcho Games, made possible by Constant Contact!

(we'll notify you when we're ready to ship; you can pay then)

Lay the Stretcho mat on a carpet and shuffle the flashcards. Choose 1 player (or a parent/teacher) to be the flash card reader and up to 3 players who will stretch to correct squares on the mat. (Take shoes off!)

After determining player turn order, the flashcard reader draws a card and reads aloud the hand/foot and value/icon that corresponds to squares on the mat. The player stretches for the correct square and holds this position until his or her next turn.

Instead of taking turns, all players respond to all called-out flash cards and stretch to the correct squares simultaneously.